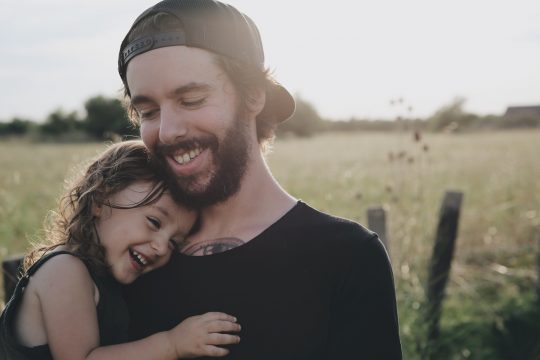 On June 25, 2020, Ohio confirmed 894 new cases of COVID-19 and seventeen Ohioans lost their lives to the virus. On that very day in Washington D.C., in a move that seems completely counterintuitive and dangerous, the Trump Administration and 18 Republican governors and attorneys general filed their opening briefs with the Supreme Court to repeal the Affordable Care Act in California v. Texas.

The Affordable Care Act (ACA), is the health reform law signed on March 23, 2010, by President Barack Obama. The main objective of the ACA is to provide more Americans with access to affordable health insurance. The ACA increased health insurance coverage by expanding Medicaid to families up to 138% of FPL, requiring large employers to provide full-time employees health insurance, offering tax credits to low- and middle-income families to help them purchase health insurance, protecting coverage for people with pre-existing conditions, allowing young adults to remain on their parents’ insurance plans up to age 26, and required most individuals to secure minimum essential coverage.

At the time the new law was introduced, about 50 million people, or one out of every six Americans, had no health insurance. That was by far the worst performance among developed countries. In the decade before the Affordable Care Act, employer-sponsored family health coverage costs increased over 130 percent, and many American families were simply not able to pay for it.

Following the passage of the ACA in 2010, the nation as a whole saw a decline in the number of individuals without health insurance, particularly following the first open enrollment period for the health insurance exchanges in 2013 and the first state Medicaid expansions in 2014. Between 2013 and 2016, the number of uninsured individuals in Ohio declined from 1.3 million to 644,000, a 48.8 percent decrease. Uninsured individuals in Ohio fell from 11 percent to 5.6 percent. Elimination of the ACA would raise barriers to care for many of the roughly 40 percent of U.S. households with children. According to a study published in the October 2020 issue of JAMA Pediatrics, Fewer families were uninsured after implementation of the ACA as compared with before. Among children, the percentage uninsured fell from 19.7 percent to 13.8 percent; among adults, it fell from 28.6 percent to 24 percent. This suggests that many children could lose their insurance should the ACA be abolished.

With the election of President Donald Trump in 2016, the Affordable Care Act‘s future became uncertain. The repeal of the ACA was one of the cornerstones of his election campaign. Symbolically, Trump signed an Executive Order on his first day as president which introduced the law’s repeal, even today, almost exactly four years later, there is still no official Republican health program available. However, the first attempted repeal of the ACA failed in March 2017 due to disagreements within the Republican caucus.

Photo by Caroline Hernandez on Unsplash

The American Health Care Act (AHCA), an early attempt to replace the ACA was passed by the House of Representatives, but never made it through the Senate. It would maintain many of the ACA market rules but give states the option to waive certain rules, including the requirement that insurers not charge people with pre-existing conditions higher premiums. It also would restructure the premium tax credits so that low-income individual market enrollees would receive a smaller tax credit and higher-income enrollees would receive a larger tax credit. In addition, the AHCA would roll back the ACA’s Medicaid expansion by phasing out enhanced federal funding for this coverage and would significantly reduce other federal Medicaid funding over time by instituting a per capita cap or, at state option, a block grant for some enrollees.

During the first two years of the Trump Administration, Republicans had a majority in both the House and Senate, this allowed them their best shot at repealing the ACA, but they were unable to do so. The ACA proved very popular with the American people. In 2017, with control of the House of Representatives reverting to Democrat control, it became nearly impossible to pass legislation to repeal the ACA.

After a legislative repeal was taken off the table, efforts to get rid of the ACA through the courts became more serious. The healthcare law is facing its biggest test in years, with California v. Texas, as the court reexamines the individual mandate, the

provision requiring Americans to purchase health insurance or pay a penalty. The mandate faces questions about its constitutionality since Republicans in Congress repealed the penalty and reduced it to zero as part of the 2017 tax cut bill. 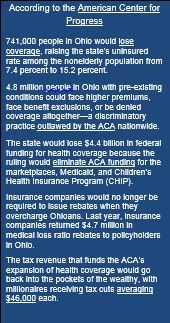 What is at stake if the Supreme Court rules against the ACA?

Make no mistake, a ruling that invalidates the ACA or eliminates core features of the law would have a devastating effect on Ohio families. If the Supreme Court, with its three Trump appointees, overturn the ACA it would upturn the healthcare system in Ohio and across the country.

Joe Biden will succeed Donald Trump as President on January 20, 2021. President-elect Biden has promised to reinstate provisions of the ACA that a Republican Congress dismantled, including bringing back the individual mandate, but efforts to reverse those policies are likely to draw legal battles in a court system where President Trump has successfully appointed nearly 200 judges with lifetime appointments to lower federal courts.

Protect all aspects of healthcare coverage that Ohioans receive through the ACA. Ohio lawmakers must come together to protect healthcare for the 4.5 million Ohioans with pre-existing conditions, and the 741,000 at-risk Ohio families and children who now get their healthcare through Medicaid expansion. Healthcare is a fundamental right and one that is especially critical during a pandemic that has killed more than 5,500 Ohioans.