This past December, a group of young advocates, who survived abuse and neglect and are working to prevent it from happening to others, celebrated a major milestone: legislators and government officials accepted their proposal for an office dedicated to investigating abuse and rights violations reported by youth who are in foster, kinship, biological, or residential placements. The young advocates’ vision for this office is now reflected in House Bill 4, legislation with broad bi-partisan support set to pass in early 2022.

This office is a beacon of hope for youth who experienced maltreatment and found that the current child welfare system failed to protect them. For these young Ohioans, who have fiercely advocated for this Youth Ombudsman office over the last year, it is an opportunity to ensure that the same traumas they experienced are not allowed to persist and harm future generations of Ohio children.

Advocacy for a Youth Ombudsman Office

One advocate in this group, Juliana Barton, a foster alumna, advocate, and aspiring physician, shared her story and lived experiences in Ohio’s child welfare system during countless meetings and hearings with legislators, making the case for the Youth Ombudsman office. In her accounts, she vividly compared these experiences to an early memory of nearly drowning:

That feeling of never being able to fully catch my breath, of drowning, and the

chaos, fear, and panic that accompanied it, would continue following me for decades, foreshadowing what my experience with the child welfare system left me feeling like: A burden. Voiceless. Unimportant. Invisible. Nearly every day, for over 17 years of my life, I suffered horrific and unthinkable abuse at the hands of my father. I was only allowed minimal contact with the outside world—just enough to prevent questioning. He kept me a prisoner.

My abuse did not go unnoticed, though. Despite showing up to kindergarten with adult-sized bite marks on my body, despite the frequency in which I came to school with no lunch, unkempt or in dirty clothes, despite the collection of cuts, bruises, and scars I accumulated over the years, and despite the numerous calls others made to Child Protective Services, each incident subsequently ended with ‘case closed.’ No one was coming to save me. At least, not until my life was in jeopardy a second time. Having been abandoned several years prior by my mother, and then later by my sister after she ran away, I was the sole recipient of my father’s wrath. The things I endured during that time period are unspeakable, unfathomable—things that I’m not sure I’ll ever be ready to share. Yet, nothing could prepare me for the events that unfolded the day I entered the foster care system, the day my father brutally assaulted me to unconsciousness … the day I thought I would be saved.

Would you believe it if I told you, that despite all the evidence that led to his eventual conviction, the priority for Child Protective Services was reunification with my father? Yes, what Child Protective Services deemed in my best interest, was placing me right back into the hands of my longtime abuser. However, that never took place. Because while I was drowning in a sea of grief and confusion, trying to process nearly two decades of trauma all at once—and without the help of any services—someone saw me. Like, really saw me.

Juliana is just one example of how these advocates have transformed their painful experiences into advocacy so that every child has access to an adult who will really see them, protect them, and act in their interests as a Youth Ombudsman.

What will the Youth Ombudsman look like in Ohio?

House Bill 4 states that a new office will be co-led by a Youth Ombudsman, one who is appointed by the governor with advice from the youth-led OHIO (Overcoming Hurdles in Ohio) Youth Advisory Board. They will work alongside an adult-serving Family Ombudsman who is separately appointed. This is significant because a Youth Ombudsman must be trusted by youth and dedicated to their specific needs. The separate role ensures that they will be focused on the unique situations of youth. The bill states that the role is appointed, which provides room for a visionary leader who will have the authority to build the organization from the ground up. Through their strategic direction, the office will be designed in a way that youth can trust and refer to their peers. It also allows them to work for systems-level change that will be truly transformative. The appointment also provides independence from the Ohio Department of Job and Family Services, where it will be housed. Advocates are hopeful that it can maintain its independence during its initial stage of implementation.

The primary task of the Youth Ombudsman is to investigate reports made by youth of maltreatment and rights violations. They must first reach out to educate youth about their rights and explain how the office helps enforce those rights. This includes describing the role of the caseworker in resolving issues and that the office should be contacted when other attempts have failed. The Youth Ombudsman also identifies and advocates for system-level reforms to protect youth. In essence, they play the role of holding the system accountable by being an independent investigator that understands the ways that the system is broken from the youth’s perspective. 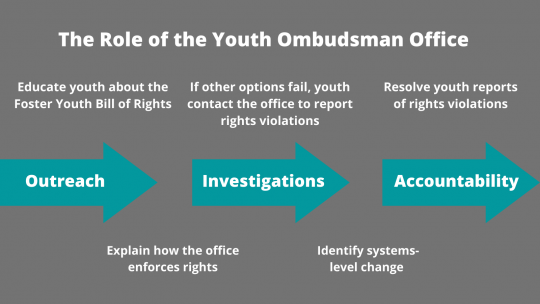 Who should be appointed as Ohio’s first Youth Ombudsman?

The challenge now is to identify a leader who is capable of this enormous task and trusted by youth. The question that the group of young advocates now face is: Who is the right person for this job?

All of these are necessary, but there is another element that is essential to youth: can they trust this person? Would they recommend this office to their peers who are experiencing a situation of abuse or rights violations? Youth in Ohio have said that they want the leader to demonstrate a sense of urgency when a young person is in an unsafe situation, to protect youth from retaliation, and to understand trauma and how it affects behavior.

Overall, advocates say that trust can be won by demonstrating a respect for individuals who have experienced foster care personally (for example, by hiring staff with lived experience in foster care or even having this lived expertise themself). They also want to know whether there is a willingness to work on evenings and weekends when youth may need help the most. Are they committed to changing the system through visionary leadership, not compliant or content with the status quo? This person will be firm and diplomatic, rather than emotionally reactive, receptive to youth, rather than dismissing their concerns. They will have skill in communicating with children and teens, which includes not over-promising and safeguarding their confidentiality.

In the near future and as part of implementation of this office, the DeWine administration will identify someone to lead in this space and who can advocate effectively for youth. The Youth Advisory Board has a stake in recommending what skills, competencies, and dispositions the ideal candidate would have. As former foster youth and youth advocates, we are committed to having an inclusive process and invite comment about what qualities would make an effective Youth Ombudsman. To learn more about this office, the implementation process, and provide your own feedback and insights, please reach out the Children’s Defense Fund-Ohio at cdfohio@gmail.com.