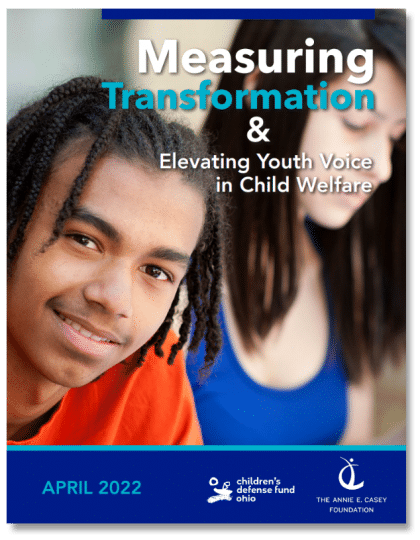 Ohio ranks in the bottom 10% of the nation on four measures of wellbeing for youth aged 21 who were in foster care in their teens, according to a new report released by the Children’s Defense Fund-Ohio (CDF-Ohio).

The report, Measuring Transformation and Elevating Youth Voice in Child Welfare, analyzes data from 2018 that shows Ohio’s youth are less likely to graduate high school or get their GED, obtain employment, or be enrolled in school and more likely to be justice system-involved compared to their peers in other states.

“Fortunately, leaders in Ohio recognize these challenges and have demonstrated a commitment to transforming the system. One meaningful way to ensure that reform efforts are effective is by focusing on data that reflect the realities of youth while they are in care,” says the report’s lead author, Kim Eckhart, CDF-Ohio’s KIDS COUNT Project Manager.

Including the perspectives of youth with lived experience in foster care is one of the report’s key recommendations to keep all children in care safe from abuse and neglect and ensure thriving transitions to adulthood. The report highlights current efforts to appoint both a Youth Ombudsman and a Family Ombudsman, which was a recommendation of the Children Services Transformation Advisory Council and advocated for by Ohio youth to investigate complaints made by those in care after other avenues have failed.

“A youth ombudsman represents hope for many people who had bad experiences in foster care,” said Deanna Jones, a licensed social worker who was formerly in foster care, on why the new Youth Ombudsman office matters. “As a teenager I definitely felt unheard, undervalued, even silenced regarding my own situation.”

The report also calls for better data collection from youth themselves while they are in care to prevent and intervene in situations where youth may be experiencing abuse and neglect.

“We are missing a key part of the story,” says Laila-Rose Hudson, a law student at The Ohio State University with experience in foster care. “We also need to be taking qualitative, anonymous, if need be, surveys of our kids in care, frequently, and asking them if they are being maltreated.”

Key findings from the report show areas that are strengths for Ohio, including:

In other areas, Ohio is performing below the national standard:

The report also highlights disparities by race, showing that children in Ohio who are Black are three times more likely to be placed in out-of-home care than children who are white. These rates are shown in detail for each age and county.

Because Ohio’s child protection and children services system is county administered, the report includes a “Child Welfare Outcomes County Profile” for all 88 counties. These profiles are now available online at the Children’s Defense Fund-Ohio website as part of the KIDS COUNT Data page.