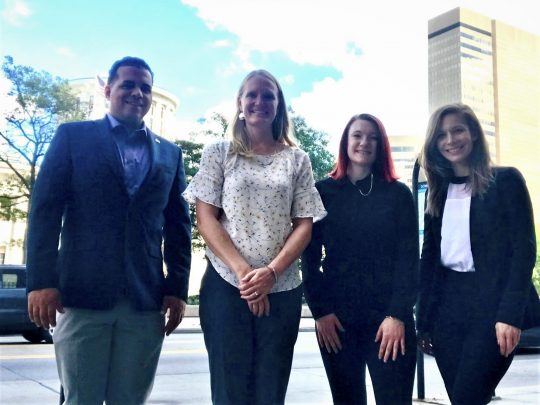 This August, youth advocates walked into a conference room overlooking downtown Columbus and sat beside legislators and government officials to explain the need for a Youth Ombudsman office that would address reports by youth of maltreatment while in placements like foster, kinship, or residential facilities. Having a seat at that table gave the young people an opportunity to ask for something specific: an amendment to the current proposed HB4 that would add a Youth Ombudsman to serve alongside the Children Services Ombudsman that was included in the bill.

In Ohio, 10 of every 1,000 children were in foster care at some point in 2020. Currently, there are 15,000 children in foster care. In our conversations with young people, many described maltreatments while in care; yet, data sources cited by professionals do not reflect their lived experiences. The National Child Abuse and Neglect Data System (NCANDS) official statistics indicate that only 4 of 1,000 children in foster care reported experiencing maltreatment while in care in 2019. While this is the source cited by many professionals, other studies have shown that upwards of one third of all children experience maltreatment while in a foster placement (Riebschleger et al., 2015, Pecora et al., 2006). Laila-Rose Hudson, an Ohio native who served as a Foster Youth Intern with the Congressional Coalition on Adoption Institute, made these observations as the basis for her policy recommendations to increase efforts to collect accurate data. She noted the role that a Youth Ombudsman office could play in these efforts.

We celebrated when Governor DeWine’s Children Services Transformation Advisory Council recommended that an ombudsman be established, and funding was included in the state budget for the initiative. Shortly after, language was added to House Bill 4 to accomplish this. Unfortunately, the legislation that was drafted did not include three specific components that youth emphasized from the beginning of its advocacy: that it be youth-centered; independent from children services; and that current and former foster youth have a role in the office’s design and implementation. 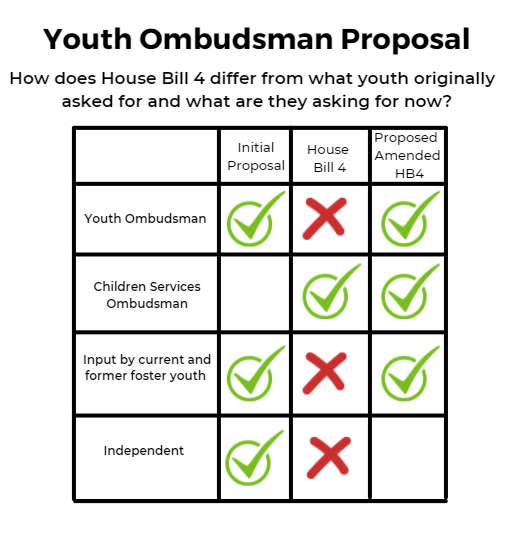 Unfortunately, although youth were literally given a seat at the table, the legislators and officials were not ready to accept the recommendation that the youth advocates made. In that sense, the meeting was not successful, but it shows that the road to justice is often long and full of setbacks, and CDF-Ohio plays a vital role in supporting movements throughout the journey. The meeting represents one milestone toward better outcomes for youth who have been in foster care, especially young people of color, who are disproportionately impacted. The invitation to a seat at the table was a major accomplishment–the result of months of advocacy, including dozens of legislative meetings, in-person testimony, and information sessions.

Through the organized efforts of people working on their behalf, youth were given the opportunity to express how they, as young people, have and continue to feel ignored when they make reports of abuse and how important it is that such an office is a place that can be trusted and held accountable to their safety and needs. Through CDF-Ohio’s partnership with ACTION Ohio and the Youth Advisory Board, young people were empowered to use their voice. Elevating youth voice is an essential part of advocating for children in Ohio, and the Youth Ombudsman Advocacy campaign represents CDF-Ohio’s commitment to this principle.

We celebrate the milestone while strategizing the way forward. It is important for young people to know that we will not give up on them, and that we are in it for the long haul, which includes follow-up communications, a sign-on letter and petition and an upcoming day of action and legislative visits at the statehouse. CDF-Ohio will continue to support them on this journey, parsing out the objections to this request and helping them navigate the political process. We will continue to amplify their voice until a Youth Ombudsman is established as a trusted place for youth.