Gen Z is a Voting Force – the Most Diverse, Progressive, and Inclusive Generation Yet

Gen Z is a Voting Force – the Most Diverse, Progressive, and Inclusive Generation Yet 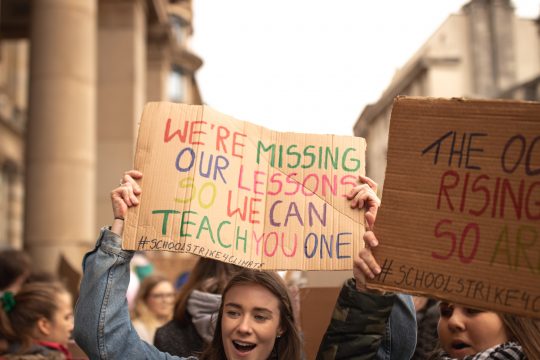 From the Children’s Crusade during the Civil Rights Movement to student groups protesting and speaking out against the Vietnam War, to millions of youths taking the streets in 2020 during the Black Lives Matter Movement, America’s youth have always been changemakers, trailblazers, and demanders of those in power to act now. As we approach the time for elections taking place across the nation, including Ohio, it is important to recognize the power of the next  generation, Gen Z, which is on the rise of becoming the most progressive, diverse, and inclusive generation ever and will be taking their generation’s values and ideologies with them to the polls.

Though the 2020 election showed that the lowest turnout was amongst voters age 18-24 at 51% (compared to the 76% turnout amongst voters age 65-74), this still represents an apparent increase in participation from youth voters based on past elections. It is true that voter turnout for this group has staggered throughout the years, never surpassing 60% since 18 year-old citizens were given the right to vote in the revision of the Voting Rights Act of 1965 in 1970. But, as the most ethnically and racially diverse generation, one that was young or born near 9/11 and has witnessed countless school shootings and massacres, two recessions, a global pandemic, climate change, police brutality, and much more, these young Gen Z voters have something to say in policy. Making up 20% of the US population, Genm Z is a large voting force for progressive policies and candidates, and this year, even more voters from this generation will be arriving at the polls for the first time.

In a study taken by the Harvard Kennedy School Institute of Politics of over 2,500 young Americans aged 18-29, researchers found that 61% of participants believed that the government should be doing more to curb climate change, even at the expense of economic growth. 64% believed basic health insurance is a right for all people and the government should provide it if one has no means to pay. And there was even a sharp increase of 19 percentage points from 5 years ago showing agreement among young people that qualified minorities should be given special preferences in hiring and education. The study also found that 68% of young voters in the study agree with the statement: “Elected officials seem to be motivated by selfish reasons.” 76% of youth, including 83% of Democrats and 70% of Republicans, agree that there needs to be more open-mindedness in politics.

The close-mindedness  witnessed and called out by our youngest voters could come from the age gap between young adults in America and those who represent them. The average age of a United States Senator is nearly 63 years while the House of Representatives is slightly younger, averaging at 57 years-old. The youngest new voters out of Generation Z were born in 2004. A distinct generation gap in values persists as Baby Boomers and Silents still dominate the legislature with political concerns and priorities that don’t always match those of younger voters, and it can lead to a disconnect in participation from Millennials and Gen Z’ers.

Social media can play a role in combatting apathy and promoting engagement among young voters. Snapchat and other groups have tried to curb this through aid and assistance groups for young candidates, like the nonpartisan Run For Office, democratic Run For Something, and republican Run GenZ initiatives, with the mission to reach the younger audiences and encourage political participation in voting and even running for public office. With social media platforms like TikTok and Instagram being a new and emerging source for news and media, Gen Z searches for authenticity when looking at political advertisement. Ethan Zorfas, a conservative consultant at Axiom Strategies states that TikTok plays a role in campaigns. “It’s more about showing an unscripted, ‘here’s who I am; here’s how I spend my free time,’ kind of relatability, likability.” Though social media is important when reaching out, it is also found that Gen-Zers like in-person interactions as well, which could be a result of the COVID-19 Pandemic. 34-year-old Congress member, Jake Auchincloss (D-Mass.), says that with in-person interactions, “you’re forced to confront opposing viewpoints in a way that does not immediately denigrate the character of someone who disagrees with you. You’re forced to recognize areas of common ground.”

Whether it’s through social media or in person, it’s clear that messaging matters for young voters. Many voters in Gen Z remember the endorsements for Joe Biden from celebrities such as Taylor Swift, Cardi B, Billie Eilish, or playing “Despacito” to appeal to Latinx voters. Or how little the pitiful pandering of former president Donald Trump resonated with them when he stood for photos on the steps of a church with a bible in hand after hiding in a White House bunker and setting militarized riot police on Black Lives Matter protestors. Not only does the messaging matter – but also the messenger. Gen Z has the power to alter the “politics as usual” rhetoric that has become so uninspiring by becoming the messengers their generation wants and needs to hear from on issues they care about and how their participation in our democracy can improve them. Just look at this week’s news – at 25 years-old, Maxwell Frost could become the first ever Gen Z’er elected to U.S. Congress after his primary win in Florida. Gen Z is finding its voice and place in American politics.

This is the exact purpose of the youth election guide, coming in October as a youth-led initiative CDF-Ohio is working on with partnership from including Ohio State University, KidsVoting, League of Women Voters of Ohio, the Ohio Association of Student Leaders, and other student organizations. With this guide, youth in Ohio will be able to get a information on different candidates, their stances on issues youth care about, and learn more about the voting process and responsibilities of elected officials. In this guide, governor candidates and other candidates for Ohio office will be featured along with a first-time guide for those who have never voted before. It will feature the different ways to vote, the importance of voting, and feature gubernatorial candidates.

We cannot demand our young voters participate in a democracy that does not listen or pay attention, while laws that are passed will affect them and their future the most. With this election guide, Ohio will be able to move in the right direction by providing information on candidates that are relevant to their young voters, advocating for their future, and showing up where their constituents need them.