Recently, Governor DeWine challenged Ohioans to complete their census forms and beat the state up north. As of April 29th, Ohio’s response rates is 58.9 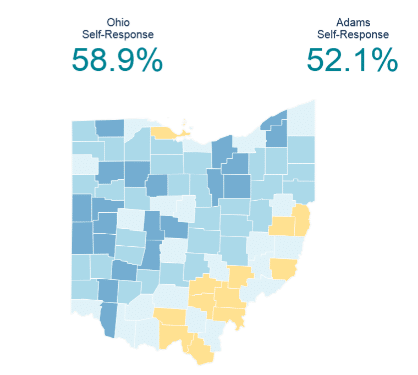 % while Michigan’s rate is leading by 2.2%. Just think of Woody Hayes’ “greatest comeback” in the 1975 OSU-Michigan Big Ten Title game – we may have started out behind, but we can turn this around in the second half.

In Ohio, there are currently 13 counties that are trailing the rest of the state, with 12 counties in southeastern Ohio with response rates under 50% and one county in northern Ohio, Ottawa County, significantly trailing with 40.2% of residents responding thus far.

In Ohio’s counties with urban centers, the response rates are much more nuanced. Overall, many of those counties appear to be doing well; however, digging into more detailed information tells a different story. The U.S. Census Bureau has a tool that allows for daily monitoring of response rates by state, county, city, and census tract. Census tracts are generally smaller geographic areas that can be described as neighborhoods – commonly with about 4,000 residents. The census tract view of many of our

urban centers show that many areas where the census response rates are low (indicated by a dark orange color) are oftentimes neighborhoods that are predominantly African American, Latinx, low-income, and immigrant and new American communities. 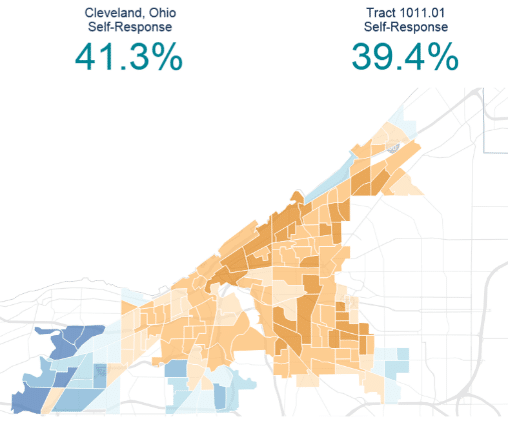 In Cleveland, the city with the lowest response rate among the urban areas of the state, rates range between 21.7% to just under 28% in the dark orange areas. A colleague observed that the census response rates for Cleveland by census tract similarly looked like voter trends in the city. It is not surprising that individuals who are not engaged in civic activities such as voting would similarly be disengaged from the census. Of course, this can be changed. Fortunately, there are a number of organizations in the Cleveland area that are working to reverse this trend and to make sure everyone who lives in Cleveland is counted.

Even with the normal census challenges, this count will prove to be the most challenging yet. With the state’s “stay at home” orders and similar actions taken across the country to contain COVID-19, the U.S. Census Bureau’s planned efforts for “get out the count” and other in-person activities will be greatly curtailed and delayed, if not completely canceled.

The Census is too important to allow for social  distancing to stymie efforts. Members of the Ohio Census Advocacy Coalition are strategizing how to shift their outreach efforts and how to augment current operational changes by the U.S. Census Bureau to make sure all communitiesin Cleveland and throughout the state are counted.

In the meantime, we must continue to get the word out and use this opportunity to reverse historic trends in low response rates. The census is an opportunity to bring our communities together and empower each individual with the knowledge that they can make a difference in their neighborhood simply by using their voice and being counted. The best part is that responding to the census takes fewer than ten minutes and has a significant impact for the next ten years. To track census response rates for Ohio, visit this site.